Da mihi factum, dabo tibi ius
(tell me the fact and I’ll give you the right)

For over 20 years I have been studying and dealing with immigration law, asylum law and criminal law. 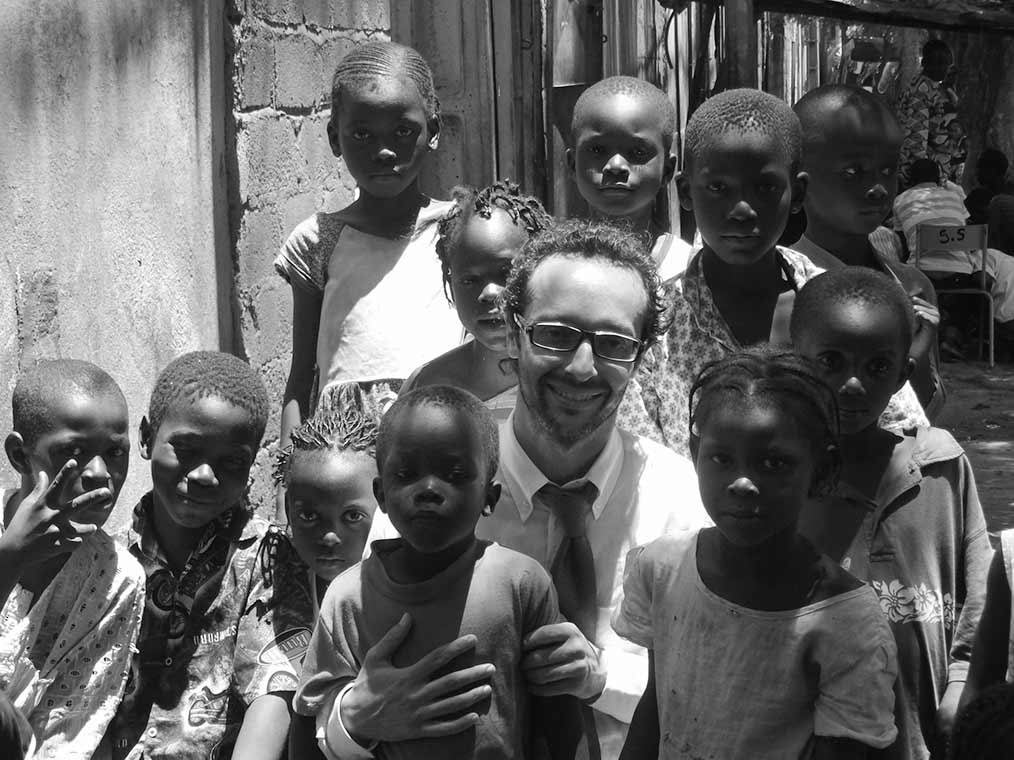 For over 20 years I have been studying and dealing with immigration law, asylum law and criminal law..

Since 2003 I have been carrying out the function of Honorary Judge of the Court of Parma, assigned to the criminal section.

In 2010 I was a member of the Commission for the Training of the Honorary Magistracy of the District of the Court of Appeal of Bologna.

I am majoring in Political Science and International Relations at the University of Parma, specializing in international law and human rights.

Member of A.S.G.I. (Association of Legal Studies on Immigration).

Since 2002 I have been a legal advisor to the Ciac (Immigration, Asylum and Citizenship Center).

Director and screenwriter of the documentary “Refugee Stories” (2005)
Diploma of “Subject writer, scriptwriter and dialogue adapter in the theater sector” (2001)
Diploma of “International Operator” at the Sinform of Bologna (2000).
Founder of the “Compagnia dello Specchio” Cultural Association (1999). 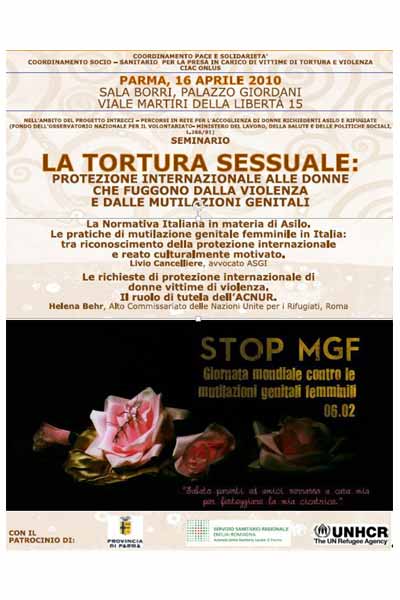 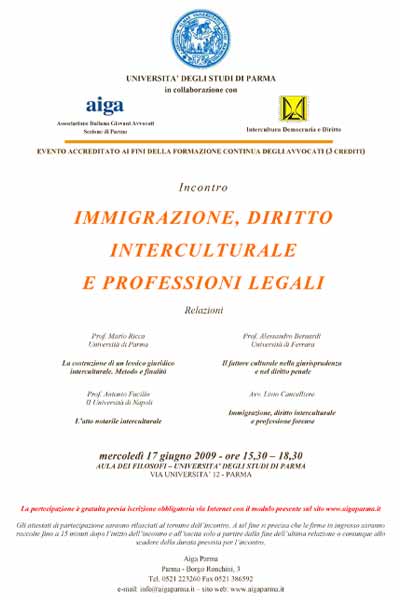 Organized by the University of Parma, in collaboration with the National Association of Young Lawyers, on the theme: “Immigration, intercultural law and legal professions” (event accredited for the purposes of continuing education for lawyers) 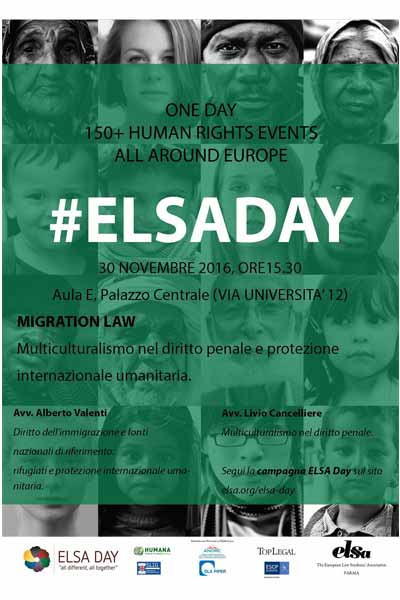 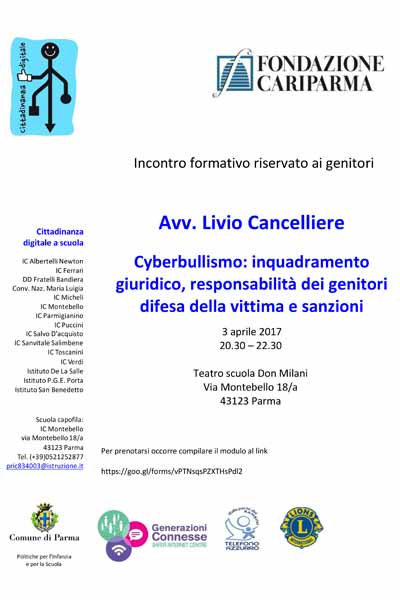 Training and professional refresher courses held by the lawyer Cancelliere

04/16/2010
Speaker at the seminar sponsored by the United Nations High Commissioner for Refugees on the subject of sexual torture and female genital mutilation.

17/06/2009
Speaker at the seminar organized by the University of Parma, in collaboration with the National Association of Young Lawyers, on the theme: “Immigration, intercultural law and legal professions” (event accredited for the purposes of continuing training of lawyers).

From 14/11/2007 to 328/05/2008
Training course organized by the Municipality of Cremona in collaboration with the Provincial Administration and the Plan Offices of Crema and Casalmaggiore on issues related to the application of legislation for foreign citizens aimed at social operators and mediators of the Foreign Service and of the branch network Foreigners.

04/06/2007
Lecturer for the Forensic School of the Parma Bar Association on the following topics: Immigration discipline. Crimes and procedural aspects: crime of aiding and abetting illegal immigration; crimes of unlawful re-entry and unlawful detention of the alien; the main issues of constitutional legitimacy.

04/2007
Lecturer for the Consumers League on the following topics: Meetings on criminal procedure: The criminal trial: control of deeds, notifications and objectionable nullity; The immigrant, validation of arrest, various types of expulsions; How to implement the best protection in carrying out the defense.

20/06/2006
Lecturer for the Forensic School of the Parma Bar Association on the following topics: Discipline on immigration: – Sources of immigration law; Regular entry into the territory of the State; Rejection and expulsion; The system of appeals in immigration law; The main crimes related to illegal immigration; The decisions of the Constitutional Court and subsequent amendments

From 03/31/2006 to 05/31/2006
Training course organized by the Province of Cremona and aimed at employment centers, temporary work agencies, trade union organizations on the following issues related to immigration: Family and foreign minors; Residence and work permit; Expulsion and citizenship; Right to asylum and protection against discrimination.

From 14/03/2006 to 27/05/2006
Training course organized by the Province of Cremona and aimed at Social Services and Municipal Offices, Healthcare Companies, Hospitals, Employment Centers, Temporary Work Agencies, School Institutions, Social Cooperatives on the following issues related to immigration: immigration and administrative procedures; Entry procedures; Permanence of unaccompanied minors on the territory and more generally on issues related to family law.

12/06/2005
Lecturer for the Forensic School of the Parma Bar Association on the following topic: Crimes and procedural aspects in the Consolidated Immigration Law

From 09/11/2005 to 23/11/2005
Training courses on legal aspects related to immigration, asylum law and citizenship for the Employment Centers of Parma, Fidanza, Langhirano and Borgo Val di Taro

2004
Speaker for Amnesty International on the regulatory framework and procedures for the recognition of refugee status.

From 29/10/2003 to 08/11/2003
Lecturer for the Parma Solidarity Forum on the main elements of immigration legislation for foreigners’ associations.

Since 2003
Training and refresher course on immigration reserved for the consultants of the Ciac (Immigration, Reception and International Cooperation Center) of Parma.

28/07/2003
Training course organized by Mediagroup S.c.r.l. of Modena for the Provincial Informastranieri network.

Publications by the lawyer Cancelliere

“”France: towards a new model of nation?” published in Quaderni Constitutional.Read